“The graphics were really good, and they made me feel like I was there with Paul Revere and everyone else there in 1770 Boston.”

“[My students] were definitely better able to understand potential for bias without me having to prompt them or ask specific questions. They truly demonstrated both skill and content mastery with this on a higher level than they typically do.”

“I thought that the people were very realistic like I could almost talk to them… I very vividly remember that Preston believed he was innocent, and that Paul Revere made it seem otherwise.”

“It was completely different than anything I had done… Everything was there that was needed for the students to be able to grasp the content and accomplish the mission.”

“[The VR features] really helped me comprehend the documents and evidence better than I had previously when we learned it in class by simply looking at it on paper and talking about it.”

What caused British soldiers to shoot into a crowd of British colonists on March 5, 1770? In Mission 1, players investigate the causes of the Boston Massacre by listening to historical figures, discovering primary sources, and asking probing questions. With evidence collected from significant sites across colonial Boston, players weigh competing perspectives, contextualize the events of March 5th, and construct a multi-factored explanation of the Boston Massacre.

Play online Get the VR game 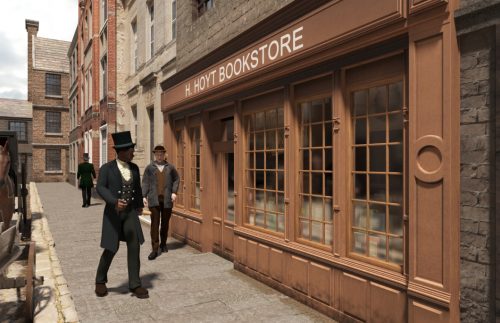 How did a law reanimate a furious debate and threaten the unity of the United States? In Mission 2, players track the effects of the Fugitive Slave Law of 1850, collecting evidence from key artifacts and historical figures at three volatile sites across the North. After contextualizing the legal, social, and political consequences of the Fugitive Slave Law, players will analyze its role in the deepening sectional crisis.

Play online Get the VR game

The results are in

Learn how to teach a TimeSnap
in your own classroom.